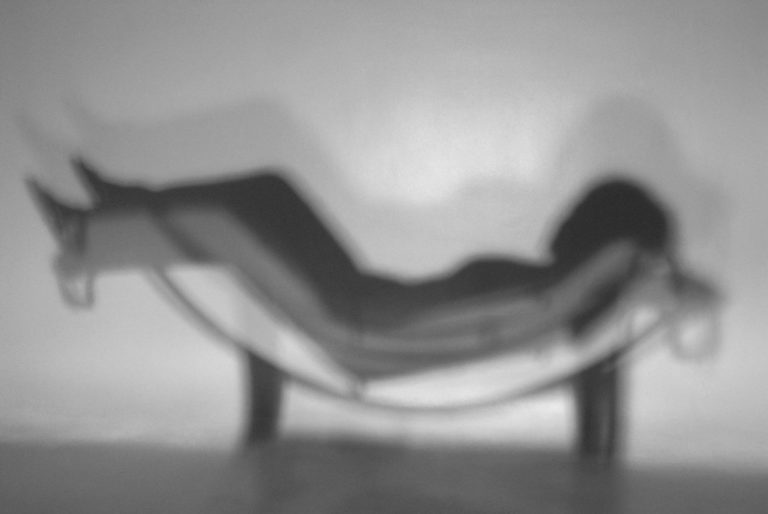 Among the most respected experimental artists of the Dominican Republic, Quisqueya Henríquez is known for works that attempt to bridge the cultural and psychological distances between the Caribbean and the wider world. Her output is remarkably diverse in medium and format, encompassing performance, video, photography, sculpture, and environmental installation.

B306 (2005) captures a figure in shadow—Henríquez herself. Lying on a lounge chair that came out of a famous collaboration between Le Corbusier and Charlotte Perriand, Henríquez modeled the image after an archival photograph of Perriand lying in the chair with a strange, ominous shadow hovering above and behind her. B306 was created for an exhibition at David Castillo Gallery in Miami, in which a selection of her work was displayed alongside major paintings by Wifredo Lam and other important Latin American modernists from the 1940s and 50s. This provocative juxtaposition prompted Henríquez to consider her own position vis-à-vis the great Latin American artists of the past, and to think about the situation she faces today as a Cuban/Dominican person active in the international contemporary art world. Within the context of Henríquez’s polemic oeuvre, the image references how artists from Latin America were once widely considered as peripheral footnotes in the art historical narrative of twentieth century art, considered to be mere shadows of the conventional European “greats.”

These reflections on the place of Dominican art collide her with Henríquez’s interest in modernist design and the hierarchies that have traditionally placed art and architecture over design. Just as artists from Latin America have so been overlooked or undervalued, so too have designers struggled to be recognized for their important contributions to the historical development of art currents. Keeping in line with modernism’s radical austerity, the image confronts these complex theoretical issues using extremely spare visual means.