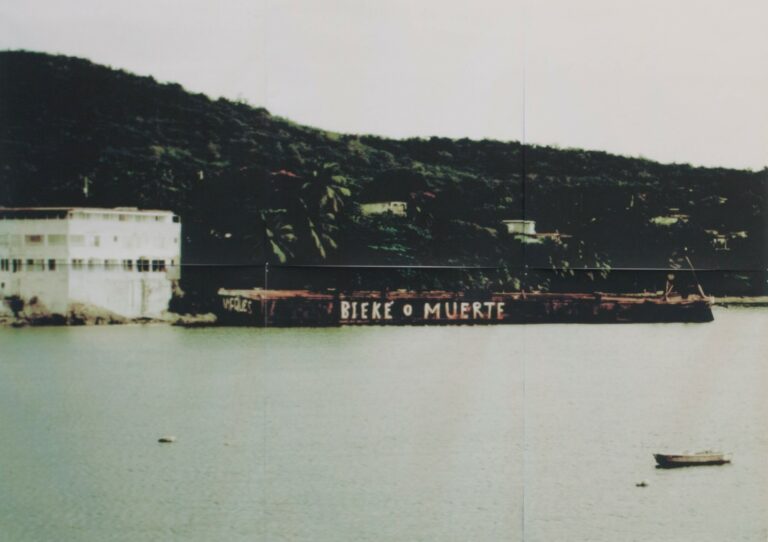 Jennifer Allora and Guillermo Calzadilla explore ideas of political power, nationalism, and the dynamics of imperialism through diverse media. This large-scale photographic work depicts an important site for the artists: Vieques, an island off the eastern coast of Puerto Rico. Since the early 1940s, Vieques had been largely under the control of the US Navy, which used the island as a bombing range and testing ground for weaponry. The Navy’s role there was highly contested by the local population. In 2001, protests against this military occupation reached their apex, gaining international attention following the death of a civil guard who was killed when bombs were fired next to the observation post where he worked. Shortly after, in 2003, the Navy withdrew from Vieques. The island is now designated as a wildlife refuge and increasingly becoming a tourist destination.

Bieké o Muerte 2001/2006, an intentionally poor-quality reproduction of a photographic image, shows a massive barge that the artists found with graffiti reading, “Bieké o muerte” (Bieké or death). The gravity of this text intervention suggests the high stakes and deep moral implications of the occupation of Vieques. The use of the word “Bieké,”—Taíno for “small earth” and the original name of the landmass given by the indigenous Arawak people—brings into play a much longer history of colonialism and exploitation in this region.