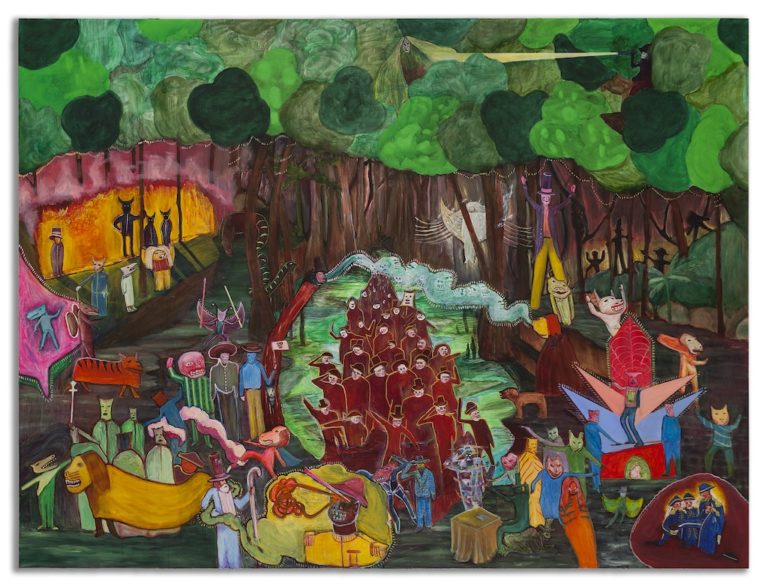 Viktor El-Saieh creates rich and vibrant paintings that examine mythology and its relation to structures of power in society. Although he was never academically trained, El-Saieh grew up immersed in the world of Haitian art. His family ran a prominent gallery in Port-au-Prince, exposing El-Saieh to painting from an early age. Influenced by Philomé Obin, Seymour Etienne Bottex, André Normil, and other Haitian master painters, the artist’s works evaluate his country’s history. A student of political science as well as Haitian painting, El-Saieh interrogates Haiti’s historical and present leadership while examining how it has spilled into the country’s folkloric culture. For El-Saieh, painting serves as a means with which to simultaneously deconstruct and re-tell history through popular myth.

Fet Chaloska (2005–16) was included in El-Saieh’s 2017 solo exhibition at Central Fine Gallery in Miami Beach, titled The Dizziness. In the artist’s words, the show addressed the “relationship between folklore and culture through the lens of mythology and its potential application in daily life.” In the painting, El-Saieh depicts the sinister Haitian carnival figure Chaloska—a character in military garb with a protruding mouth and claw-like teeth. This figure is based on a military officer, Charles Oscar Etienne, who was involved in the murder of 150 political prisoners and terrorized the southern town of Jacmel in the early 1900s. Through this surreal scene of a carnival celebration, El-Saieh addresses the way in which political history is transposed into Haitian vernacular culture.