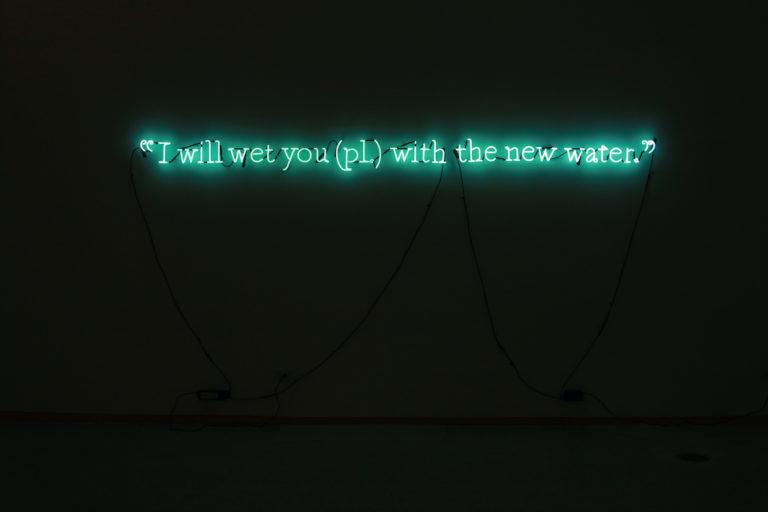 Miami-based artist Jamilah Sabur works across multiple mediums and disciplines. Sabur adapts the visual aspect and semiotic strategies associated with classic conceptual art practices to explore issues of transculturation and the postcolonial condition, moving freely between video installation, painting, sculpture, photo collage, and ritualistic performance. She frequently weaves highly personal narrative content into her work. For instance, motifs drawn from her mother’s recollections of their ancestral home in the Blue Mountains outside of Kingston, Jamaica, come into play in several of her works. Against this backdrop, Sabur adds subtle, oblique references to myriad research topics, from climate change to indigenous histories.

I will wet you (pl.) with the new water is based on Sabur’s fascination with the Timucua people, a Native American tribe whose lands once stretched from north central Florida to southeastern Georgia; the last Timucua died in the 1700s. Sabur immersed herself in the study of the Timucua while doing a residency at the Crisp Ellert Art Museum at Flagler College in St. Augustine. It was there that she first encountered the work of George Aaron Broadwell, a professor at University of Florida and the leading scholar on Timucua language and culture. Sabur was particularly struck by Broadwell’s translation of a Timucua interpretation of a tract on baptism from 1612. Originally written in Spanish by Francisco Pareja, a Franciscan missionary in Spanish Florida, it was translated into the Timucua language before being translated yet again by Broadwell. With poetic efficiency and melancholy, Sabur calls forth a host of associations, evoking the complexities of human language, the difficulty involved in transmitting and preserving cultural traditions across gulfs of time and context, and the spiritual limitations of Western anthropological study.