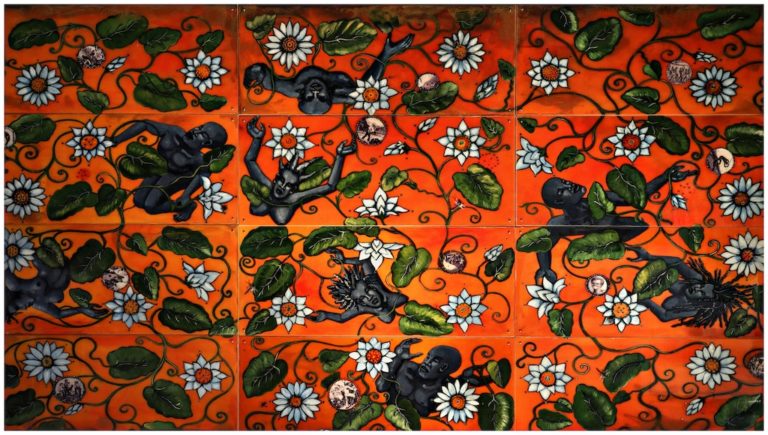 Known for his large-scale fantastical works, Edouard Duval-Carrié makes paintings and sculptures using diverse materials including glitter, glass, and resin. Influenced by his upbringing in the Caribbean, his work is heavily embedded with iconography from the region’s histories, politics, and religions. His practice is inspired by magical realism, an aesthetic that imbues realism with mystical, fantastical elements. In his works, Duval-Carrié depicts his subjects against surreal landscapes laden with motifs from Haitian Vodou and European colonialism. No matter how dreamlike or nightmarish the setting, his figures are always depicted as prideful, inhabiting a powerful state of being. Duval-Carrié’s referential approach illustrates the region’s problematic colonial history with the West, while also embracing Africa and the Caribbean as places of positive transformation. He champions those cultures, revealing the power of their histories and their role in shaping the modern world.

La Triste Histoire des Ambaglos (The Sad History of the Underwater Spirits) is often cited as a memorial piece dedicated to the souls lost to the Middle Passage—a triangular trade route used to forcibly transport slaves from Africa to the New World during the Atlantic slave trade. It is believed that the vengeful spirits of drowned African slaves still linger in the waters of the Middle Passage, a theory in keeping with ancestral African traditions. Such customs deeply permeate the cultural fabric of the Caribbean, further enforcing Duval-Carrié’s commitment to deconstructing the Western canon. The painting itself embodies this, as Duval-Carrié interrupts these portraits of African slaves with daisies. A symbol of innocence and purity, the daisies mesh with the work’s gold underpainting to elevate the slaves to a regal and dignified status. By depicting them this way, Duval-Carrié restores their agency and power, providing a stark contrast to colonial narratives and histories.