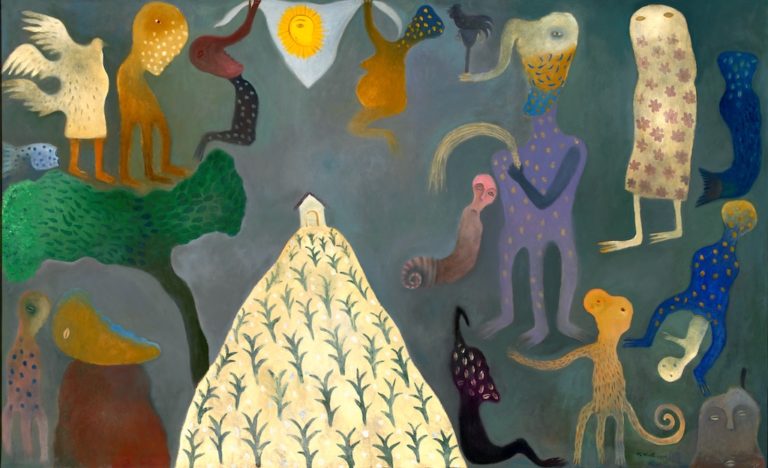 Manuel Mendive Hoyo is one of the most important Cuban artists living today. Born in Luyanó, he is a practitioner and promoter of the Afro-Cuban religion, Santería—a complex blend of African and Catholic beliefs, customs, and icons. His meticulously executed paintings illustrate traditional African myths and narratives pertaining to the Yoruba gods, or orishas, who each rule diverse aspects of nature: the winds, the rivers, the mountains. Manuel Mendive Hoyo’s poetic, semi-narrative images are generally colorful and filled with cartoon-like figures. Upon closer inspection, we find that his images also convey dark subject matters, and often contain references to the historical violence perpetrated against people of African descent.

“Olofi” is a creolization of the Yoruba word “Olofín,” the honorific title of Olodumare, the supreme being of the Yoruba pantheon. The title Olofín means “supreme ruler,” and among the Yoruba is often combined with “Orun” (heaven) or “Aiye” (earth) to designate Olodumare as the sovereign of those planes. Among Santería practitioners, Olofi is often associated with Jesus Christ as the personal God of mankind.

Manuel Mendive Hoyo holds a unique position within Cuban art history. Having formulated his artistic language in the early 1960s, Manuel Mendive Hoyo eschewed the fervently ideological approaches associated with his slightly younger contemporaries who developed their work throughout the late 1960s and early 1970s. Consequently, Manuel Mendive Hoyo has served as a bridge between the prior generation of artists including Antonia Eiriz, Raúl Martínez, and Servando Cabrera, and the post-80s generation, which included artists like José Bedia and Juan Francisco Elso Padilla. Both groups tended to value free expression over direct political statements and shared themes such as the role of African culture in the formation of Cuban identity.